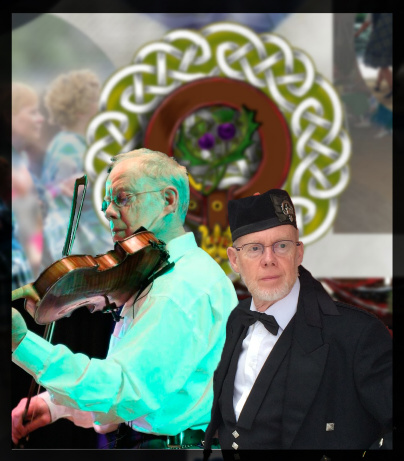 It is with heavy hearts that we inform you of the passing of our honorary member, Rik de Vroome.

Rik and his loving wife Claire were members of the Thistle Club from the very start and we all enjoyed his company, his lessons, his musical creativity and his wonderful dances.

We send Claire and the family our deepest condolences.

Our founder member of The Thistle Club, Frans Ligtmans, was born & bred in Zierikzee, province of Zeeland, NL.
Folk-dancing (mainly Dutch & English) became  her hobby and she first experienced Scottish Dancing during a course in Vlissingen (Flushing) when a dance teacher came from Scotland to lead the course. She immediately  went to St. Andrews Summer School and later gained her Teacher’s Certificate there. 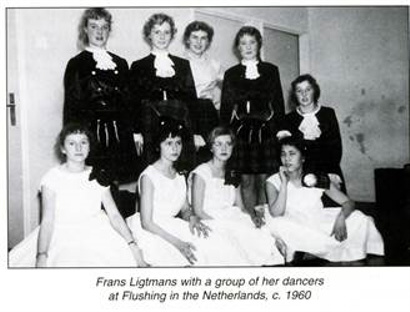 After a career change, from quality control at the Hero conserved foodstuffs factory in Breda to becoming a schoolteacher, Frans came to Eindhoven to support the  mathematics/IT department at the Technical College. Here she met and married her lecturer: Cor and their children Roelof and Renske were born.

With some Scottish dancers and the support of her family, Frans started a new  SCD-club in Eindhoven: The Thistle Club.
That was forty years ago, in 1977. With a couple of new members we had just one set of 8!
For many years Frans was the life and soul of the Thistle Club. She had a strong personality and was not always easy to deal with, but she was an exceptionally good teacher. She did a lot to promote SCD in Eindhoven and elsewhere in the Netherlands and even abroad. This was also recognized by the RSCDS who awarded her a scroll, a great honour!
Her family supported Frans throughout and they each became good dancers – her children gained their teaching certificates – and Renske also taught Highland dancing and learned the Scottish bagpipes!
At its peak The Thistle Club had some 50 members; Frans gave lessons to beginners, advanced and children; led Preliminary Teachers Courses on the continent, wrote dances, made costumes, did the choreography and rehearsals for demonstrations – on the street and in the theatre – and held large festive events with British bands and teachers. 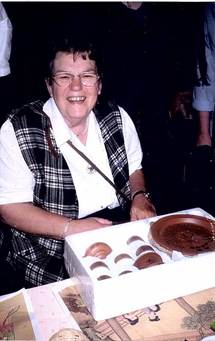 Frans loved Scottish music and dancing and was very good at needlework (quilting was another hobby). She enjoyed cooking for our guests at the annual Dayschool & Ball and she often invited people out to eat at her local Chinese restaurant; on this occasion the Thistle Club was invited to her 60th birthday celebration.

Sadly, Frans' health kept her from dancing in later life. She had already undergone heart surgery and made a good recovery but her heart remained a weak point, the poor circulation affecting her legs, and after a nasty fall and hip fracture she was confined to a wheelchair for the last years of her life. She kept busy at her quilting and many of  her friends still enjoy the results! In the end she was being treated in hospital for a painful bacterial infection of the legs, when an internal bleeding proved fatal.

It is the end of an era, but she left us dancers many things to remember and enjoy: the dances she composed as well as the inspiration to go on and dance with joy and to the best of our ability, whilst sharing with others the fun involved. We won’t forget her!

We first met George McLennan at a Day-school & Ball of the St. Andrews SCD Society in Brussels. Afterwards, our teacher Mrs. Frans Ligtmans invited George to play for the Thistle Club day-school in Eindhoven.

As George was then living in Brussels, he became a regular pianist both there and at many day-schools in Holland (mastering the Dutch language so he knew what was going on!).

Travelling by train to Eindhoven, he would usually stay with us (Claire & Rik) overnight and Frans & Cor and other members and their guests would come round for coffee the next day. On one such occasion we had taken him to the station for the 3-hour journey back to Brussels. Later we discovered he'd left his house-keys behind so he had to go to a friend's house to collect a spare key!

After George returned to Edinburgh he still flew over to do some day-school accompaniment. Frans always hired a "real" piano for the occasion, not the electronic kind!

We well remember George's 60th birthday dance of 15th June 1996, held on a summer evening in Wimbledon High School, London. It was there that we heard Keith Smith play the violin and Robert Mackay and Muriel Johnstone playing ‘separately and together’  on the piano.

When Frans was teaching her third Prelim Course, this time in Germany for the many young aspiring teachers there, it was only natural that George should go along with her to play for the Prelim weekend course in Schluechtern, near Frankfurt Am Main.

This course led to a new dance: “Certificate Pleasure” written by Frans Ligtmans in 1997, for which George composed music "Claire's Quickstep". Originally he wrote it as a jig but - on Frans' request - turned it into a reel. Robert Mackay will play this tune at George's funeral.

This dance and music were published in the Thistle Club Jubilee Book of dances (presented at our 25th Jubilee Ball in Eindhoven  in October 2002). 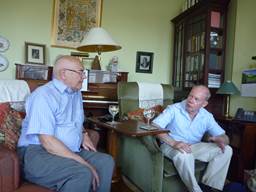 contact with George became less frequent as time went on and new pianists were given a chance but we exchanged Christmas cards. Last year we visited him in his apartment in Howe Street, where he lived on the top floor without a lift. The exercise kept him healthy, he claimed, but his angina pectoris made him pause for breath after a few flights of steps. 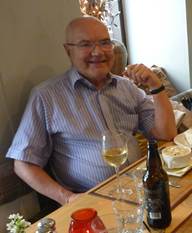 He took us out for lunch,  showing us points of architecture (his former profession) on the way. Then he took us to Dean Village - a quiet haven within the busy city, on an hour's leisurely walk.

We will remember George with respect for his musical knowledge and ability, his ten fingers massaging the keys as he accompanied our dances! He would surprise us by introducing Dutch traditional tunes into his sets! He was a special person, sometimes a tease, who enjoyed company with a good old chat and a bit of blather.

I was first introduced to George about 40 years in Reading by Peter Luke.  We then met each other again at a dance weekend in Brussels, after I moved to the Netherlands.  It was nice that George remembered me from that first meeting.

Not only did George play for weekends in Brussels and Eindhoven, but he frequently came to Utrecht to play for the Swilcan both while he lived in Brussels and after he returned to live in Edinburgh. I'll always remember George spending time searching through the second hand bookshops for old music books often successfully and triumphantly when he was there for our summer workshop.

As Claire de Vroome has already said George played in Schlüchtern near Frankfurt for Frans' certificate course and also took the exam himself. Due to all the pressures on him trying to do both, he was unsuccessful so took it again at St Andrews joining the same course as I was on just for the exam. As I knew George, it was decided that I would be his partner for the dancing part. We were both successful.

Some years later George played in Essen several times for their January workshop as well as for their away weekend in an old bishop's castle in Gemen. Both Bas Broekhuizen and I taught at those weekends. I also saw George regularly at summer school until he stopped playing there. That last year he fell over a wall and and injured himself. He was very embarrassed about this as he was teased that he had drunk too much.

He had a particular sense of humour which, while it fitted with his style of piano playing and dancing, could take some getting used to.  Personally I always enjoyed the time I spent with George  at events and socially.  He was a character and will be missed.

He was quite a character. Once in Essen he forgot the suitcase with the music for the day. He left it in the tram. So we started with cassettes.

On another occasion he came to the Nunspeet weekend with two left shoes, for during the evening.

And he collected music (sheet music) at flea markets.

He made a set for a strathspey without knowing the origin of the music; when Frans Ligtmans and I started to sing the words of this Dutch tear-jerker song of a mother writing a letter to her son in jail, he looked flabbergasted.

He was a great musician with a special character whom I will never forget; thank you George for all the times you let us dance. Never forget that it is the music - and the musician - making you dance!